More Than a Civil Issue: Special Considerations for a Jewish Divorce 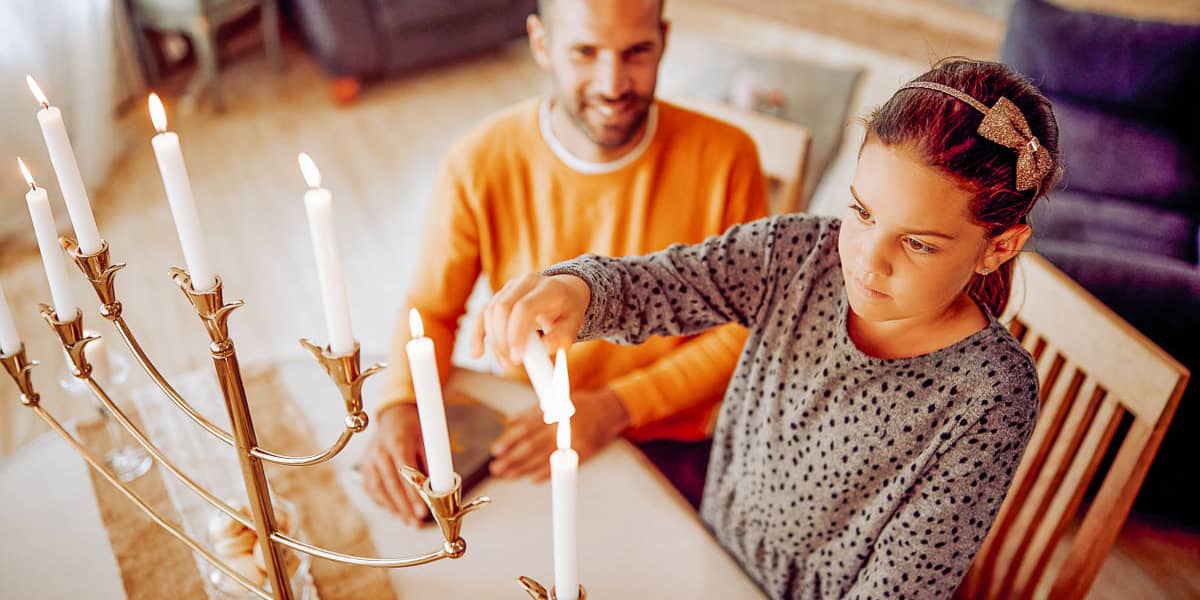 As a woman who leads a somewhat observant lifestyle (except for a crab or lobster roll here and there), divorce presented an interesting hiccup. You see, ending a Jewish marriage takes a lot more than lawyers, a judge, and a final divorce decree. It involves uncoupling in the eyes of G-d via a get, or a divorce document, handed to the woman by the man in front of witnesses and a Jewish court.

With this process comes a lot of outdated customs and a spiritual "cutting of the cord" that changed me from that day forward.

When a Jewish woman and man marry, part of the wedding planning process involves picking out a ketubah, or a Jewish marriage contract. The ketubah is signed before the ceremony. Its purpose is to outline the rights and responsibilities of the groom to his bride. It is typically framed like a work of art and displayed in the home. I always joked it was a reminder to him about the dowry my parents paid him to marry me. Because I cannot read Hebrew, I was always a little skittish about what else was in that contract. Little did I know it was actually designed to protect ME.

In fact, Judaism is one of the first religions to have a document that holds women's rights in any esteem. And to be completely honest, it was something I was told to do, and it meant a lot to my religious family. So, I complied.

Little did I know this ketubah was something I'd have to undo once I filed for divorce.

On the day I told my family my sixteen-year marriage was ending, my mother reminded me that we would also need to get a get. I remember saying to her, "Get a what?" She explained that we not only needed to be divorced according to the civil laws of the state of California but also in the eyes of G-d.

Divorce was messy enough, and here was my family, adding one more thing to my divorce to-do list. I was already overwhelmed. Frustrated. Sad about dividing 16 years of our marriage on paper. When my civil divorce judgment was filed, I didn't feel much different.

I remember calling my best friend and telling her it was done. In the same breath, I said, "I don't feel any different. Why don't I feel a release? Why do I feel so sad?"

She reminded me that the emotional process had always been different for me, and perhaps I just needed time for it to sink in. As I struggled to answer these questions, my mother called to see how I was doing. Our energies have always been in sync: We know when something is going on with the other. Call it mother/daughter intuition. Ever since I was a child, I've recognized it as our special spiritual connection. And thankfully, she is really good at reminding me to do things. (I know many of you can relate.)

But in this case, I was grateful. Because that day, she asked me if I made the appointment for the get. Yikes, no. I hate telling my mom I forgot to do something ... so I said I would do it as soon as we hung up the phone.

I contacted my rabbi, who explained my next steps of the get. He connected me to another rabbi, who would create a Beit Din, or a Jewish rabbinical court, which would complete the divorce in a historically and emotionally relevant ceremony.

I had no idea how much closure the get would bring me, but I felt a spiritual need to complete it as soon as possible. So, the appointment was made. The check was written. I notified my ex-husband that he needed to be present to complete our divorce according to the laws of Moses and Israel. At the time, in my mind, I was simply checking a box. A box governed by the law of Judaism ... and my parents. I knew how much it meant to my mom. And to be honest, even though I had no intention to remarry, what if I changed my mind? This would give me the choice to remarry, and by a rabbi. Kind of like an insurance policy. So, why the heck not? Just in case.

Letting him see my authentic feelings

When the day arrived, I was extremely nervous and unsure of what was going to happen. How I would feel and react to seeing my ex-husband again? We see each other rarely, and when we do, it's because we're dropping off the kids or attending a sporting event. Even then, we don't speak.

Would I have to sit next to him? Would I have to face him? The anxiety churned in my stomach as I drove to the University of Judaism in Los Angeles. I made my way to the basement where the rabbi's office was located. I was the first to arrive. When I tried the door, it was locked. Good, I thought. It will give me time to meditate and breathe. Deeply.

I asked my angels for guidance and support. To be with me no matter what. And suddenly, the anxiety washed away. I was wrapped in the warmth of a fuzzy blanket on a cold day. I was not alone.

Within minutes, the rest of the clergy arrived. So did my ex-husband. I spent 90 minutes in a room with my ex, the rabbi, two witnesses, and a scribe. It was like a scene from a movie you watched in history class about the "old days." I remember looking around the room and thinking to myself, "How did I get here?" And then I remembered that this was my choice. I listened to my gut and respected myself enough to do what was best for me. Tears started running down my face – tears of sadness, grief, and joy.

I tried to wipe my tears discreetly so my ex wouldn't see my emotion. And then I decided I didn't care. Let him see my authentic feelings. This was me in grief. I was not hiding or running from it anymore.

After confirming that my ex-husband and I were uninterested in reconciling or working on our marriage, the get ceremony began. It was the last venture we would partake in as a couple. Much of the ceremony is the husband speaking in English and Hebrew along with the rabbi. After confirming our Hebrew names and those of our parents, the scribe began to handwrite our get on parchment with an ink quill. I felt transported to another time and place. He was so precise with every letter, making sure not to touch one letter to the next (or it would be void). We sat in silence as this took place for at least 30 minutes.

During that time, I watched the scribe closely. I kept thinking how fascinating the world of Judaism is. And how the meaning behind this ceremony was so important. I hadn't understood it until that moment.

We were together for 22 years. I know we had also been in past lives together. I had been struggling to let go, spiritually, of my ex. And suddenly, as the scribe wrote, I felt a release. I felt it in my chest, which made breathing easier. My heart inflated with blood, pumping at a normal pace and with warmth again. I felt my angels supporting me. I heard them telling me it was almost over. They told me to stay in the moment and feel what was needed to move on.

When the scribe finished, he passed the document to the rabbi for him to approve, witness, and sign. The rabbi then folded the document in the symbolic way established by my ancestors. He handed it to my ex and told him to give it to me as a gesture of allowing me to re-marry.

Yes, the purpose of the get is to allow the woman to remarry and be free of their husband. My ex-husband handed it to me. He was unable to look me in the eye.

I eagerly accepted the folded parchment and then passed it back to the rabbi, acknowledging my acceptance. The rabbi reached into his desk and pulled out an Exacto knife, which he used to slash the document that had just been so meticulously created. He declared our get complete.

Tears streamed down my cheeks. My mouth formed a slow smile. It was finally over. For the first time in a while, I felt like I could breathe again. I could breathe as the woman I became as a result of all I had been through.

She rose up and out of my body, ready to be freed. It was over.

The rabbi then asked if I wanted to say anything to my ex-husband, as it is customary to give the woman the opportunity to speak. Back in the day, women were not allowed to voice their opinions often, but this was a time they were given to speak freely. My mind raced around how old customs have not been "updated" to reflect women's rights. Nonetheless, I accepted his offer. I thanked them for their time and for conducting a beautiful tradition. I mentioned it must be updated to fit with how the world works, which got me some smiles. I shared that I had felt timid when I first walked into the room. I was unsure what the ceremony would be like. But now, I had so much gratitude for what it did for me spiritually. I explained that I had been trying to disconnect from "this man" since we separated, and nothing worked. Until today.

I gave thanks for the freedom of my soul. For the gift of deep breathing that was truly mine now. The rabbi then asked my ex-husband if he had anything to say. He declined. They told us it was over. We could leave.

A lump rose in my throat as I walked out the door, a skip in my step. I remember pushing open the doors of the building, looking up at the clear blue sky, and saying over and over again, "Thank you, G-d! Thank you, G-d. Thank you, G-d." Tears of joy streamed down my cheeks. I ran to my car, eager to start my new life. I was spiritually free of my ex-husband. I called my mom, and the first words out of my mouth were, "I am so glad you pushed me to do this because it is finally all over."

Closure took on a new meaning for me that day. I always thought closure meant,  "Get over it and move on." That day, I realized it meant accepting that our chapter was over. I reclaimed my power over my well-being and self, and I felt the strength to move on.

That day, it was just me (the future), the rabbi (the present), and that parchment (the past) in the room. A triad, so to speak.

I walked out of the room with my angels and spirits cheering for me and trusting that my life was just beginning. My soul was free, and I could clearly see the gifts of my divorce. For the last time, I flipped the sign from "I do" to "I'm done." And now, I get to decide what's next. 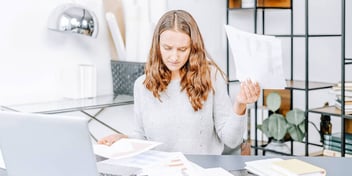 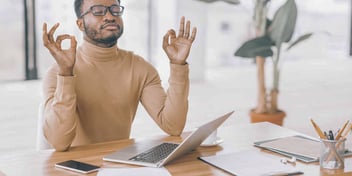 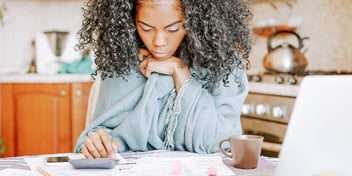