Is Your Ex Spouse Really a Narcissist?

It’s become common to use diagnostic language when describing other people’s personalities. "Manic," "crazy," "sociopathic" and one many spouses use to describe their high-conflict partner: "narcissist." But a widespread understanding of these disorders is a double-edged sword, and using these terms can be offensive or downright damaging.

On one hand, it’s helpful for people to be more aware of certain “red flags” in their relationships. On the other, it’s important to note that only qualified mental health professionals can diagnose personality disorders — or any other mental health conditions, for that matter.

In fact, it can be damaging to throw diagnostic language like the term “narcissist” around casually. So let’s take a look at what narcissism really is. We’ll start with a brief history of where it came from.

Where did the term "narcissism" come from?

We have Greek mythology to thank for the origin of the term “narcissism.” As described in Personality Disorders in Modern Life, Narcissus was a beautiful and well-loved young man who was unable to love anyone in return. Upon seeing his reflection in a pool of water, he fell in love with himself. But because Narcissus did not realize he was gazing at his own reflection, he drowned in an attempt to get closer to the only one he loved.

The term “narcissism” first entered the world of psychiatry in 1889. Sigmond Freud later published On Narcissism in 1914. Given how long the word has been around, perhaps it’s no surprise that it’s getting a little tired.

How are people diagnosed with Narcissistic Personality Disorder (NPD)?

So what is a narcissist, really? Colloquial usage aside, Beth Richman, LCSW, breaks down an actual NPD diagnosis.

Essentially, narcissism is a pattern of “grandiosity” comprising a “constant need for admiration” and a “lack of empathy.” The trait must be pervasive in a way that interferes with normal life. It typically begins in early adulthood.

For a person to be diagnosed with NPD, they must meet five out of nine criteria:

Note: People can have narcissistic traits without having NPD. In fact, narcissism is generally understood to exist on a spectrum, with most people landing on the low or middle end of the range. As you read the list above, you may even recognize some of these characteristics in yourself or the people around you.

Where does narcissism come from? Are people born with these tendencies? Do they develop in childhood? Here’s what Richman has to say:

Narcissism has been written about from the earliest days of psychotherapeutic theory. The disorder was thought to have originated in infancy/toddlerhood, when the child’s healthy narcissism was not properly met by the mother and therefore, the developmental need never got nurtured. This in turn created an arrest in that early phase of development.

A more modern read of this is that when children are not nurtured in their early development because of parental or caretaker challenges or because of early abuse, neglect, or abandonment, they cannot develop skills beyond the most immature ones that are purely about the self. The ability to develop empathy gets interrupted and at times eliminated due to mistreatment at critical phases of very young development. This causes significant personality impairment.

As interesting as it is to dig into the origins of narcissism, the causes ultimately don’t matter to those of us who aren’t therapists. It’s tempting to excuse behaviors when we can empathize with their origins, but no matter the cause, people don’t get a pass when their behaviors are harmful.

How common is Narcissistic Personality Disorder?

With all the talk of narcissism these days, you might expect to run into someone diagnosed with NPD around every corner. Is that accurate? Let’s dig into the research.

Curious about gender differences? There’s a study for that, too. According to Gender Differences in Narcissism: A Meta-Analytic Review, men are slightly more likely to display NPD (7.7%) than women (4.8%).

What you should know about Narcissistic Personality Disorder

Personality disorders in general, and NPD in particular, are rare. But when someone does have that diagnosis, they probably have other issues as well.

The authors of these studies are primarily concerned with these “comorbid conditions” because of the challenge they present to diagnosis, but for our purposes, there’s another concern — people suffering from multiple disorders are exceptionally challenging in relationships.

How does narcissism affect relationships?

People with NPD — and people who are simply on the high end of the narcissistic spectrum — can come across as charming at first. This can make it easy for them to get into relationships or land jobs.

But people with NPD have difficulty maintaining healthy relationships over time. Some of the same traits that may have helped at the beginning of a relationship can rub people the wrong way over time. And that’s just the tip of the iceberg. Narcissists can exhibit all of the classic abuser behaviors, such as being strictly controlling and seeking to isolate their partners.

Ultimately, being in a relationship with a narcissist can range from exhausting to damaging, and you need to look out for yourself because they aren’t going to do it for you.

3 tips for dealing with (and leaving) a narcissist

1. Prioritize your safety above all else.

Managing your interactions with a narcissist should generally be about keeping yourself safe until you can get out of the situation. (Remember, we’re talking about people with full-blown NPD, not just people with some narcissistic traits.)

"I think of folks with a strong narcissistic bent as creating an enormous house on top of a tiny foundation of toothpicks. They are intensely fragile and defend their fragility with a fierce and often violent set of responses. If you poke their vulnerability, they will make you pay. They do this to restore a sense of safety that comes from intense and unrealistic hypervigilance.

"I think it is always wise to respect this level of vulnerability in order to keep yourself safe. You may have to play into their grandiosity in order to get your needs met. So for example, make them feel strong if they have power over you so you can stay protected and move through the interaction without getting harmed. Going head-to-head on their territory is unwise unless you are in a position of power over them."

And when it comes to leaving, Richman advises, “As awful as it sounds, it is smart to be deferential when breaking up with a narcissist. Making them feel strong until you get out completely is essential. I am aware that this is encouraging manipulation, but manipulation is often essential when safety is a concern.”

2. Protect yourself when leaving.

When it’s time to leave a narcissist, Richman advises hiding your intentions from the person as much as possible. Although honesty is usually considered a virtue, she describes it as a “luxury” when your own survival is at stake: “You will return to your authentic self when you are out. There are people on the other side who will be safe … This person is not safe in that way.”

3. Involve others on your team.

If you’ve been living with a narcissist for a while, it’s easy to forget that you come first.

Richman advises, “Shoring yourself up with support from others … is a good idea.” And remember that insults hurled by the narcissist, which you may experience, “are just them trying to keep control.”

If you don’t have a robust network of friends and family to help you through this, don’t hesitate to bring in professionals. Everyone from therapists to lawyers may fit the bill, depending on your needs. Regardless of your situation, you don’t need to handle it alone.

Need more advice on how to get out? Check out the Hello Divorce article, How To Divorce a Narcissist.

Stella Harris believes communication is key to satisfaction in relationships. Professionally trained as an intimacy educator, coach, and mediator, Stella brings empathy, expertise, and a fresh perspective to help clients find their sticking points and break through the roadblocks to their goals. Stella’s wide-ranging expertise has led to being featured on the evening news discussing the importance of sex education in schools, appearing as an expert witness in court, and even speaking as an authority on banana slug mating habits. Stella is the author of two books, Tongue Tied: Untangling Communication in Sex, Kink, and Relationships, and The Ultimate Guide to Threesomes. Learn more at www.stellaharris.net or follow her on Instagram @stellaharriserotica.

Recovering and Healing from Divorce Grief 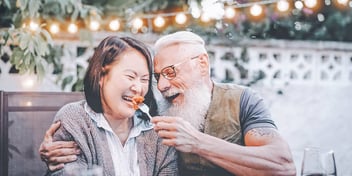 Sex After Divorce: Advice from a Certified Intimacy Educator and Coach